I am Me by Karla Kushkin 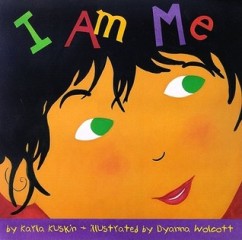 Concisely written, Karla Kushkin’s I Am Me is a biracial little girl’s declaration of pride in both the physical characteristics that connect her to the people in her family as well as her self-pride in her individuality. She is a mixture of various characteristics of her father, her mother, and their respective families. Although the race or ethnicity of her father is not clear, he is a man of color, while her mother is Caucasian. With tawny skin and dark hair like her father and light green eyes like her mother, she is an apparent blend of two distinctly different ethnicities. Dyanna Wolcott’s illustrations emphasize the physical contrast between the two families (and the differences between the little girl and her parents) as they mingle together on an outing at the park filled with swimming, bike-riding, and a picnic. The text and illustrations are rendered in a manner that mimics a child’s innocent observations and the playfulness of the narrative and images makes this book visually and audibly attractive and relatable to a younger audience.

A fairy tale story of the at-birth adoption of a Central American daughter by her parents from the United States. Through magical, mosaic illustrations and mythical language, we learn of a family connected in dreams before the child is even born. The flight the parents take to get their daughter when she is born is on an airplane but the illustrations show the parents flying freely through a multicolored night sky seemingly flying on the fulfillment of their wish to be parents instead of on an airplane. The baby’s first night is chronicled, including the fact that she grew in another mother’s stomach who couldn’t afford to take care of her so mommy and daddy came to take care of her as the fulfillment of their life’s wishes. Then, baby girl goes home where the people who were excited to meet her even before she was born are the family and friends cartwheeling through the streets in celebration of her arrival. Parents and children will be carried away by the magic of this story.