The number of times the kid in this book says he doesn’t want to be mixed and the emotion with which the author writes it hit me so hard I was hurt, angry and turned off. I thought, “I can tell why she had to self-publish!” which isn’t really fair because there are some well written books that are self published. I imagine she wrote this book by putting her child’s actual feelings and a real conversation with her kid on the page but for me it kicks so hard, I wouldn’t read it to my 3-year-old; maybe a five and older kid who actually feels this way or needs guidance in peer counseling to help a mixed friend feel better about him/herself. The way the kid learns to feel better about himself is also challenging because way too much of the language that should come from the mother comes from the boy a la, “I know this is what you think of me mom” but there’s no continuity because he is not repeating or restating anything his mother has said. I would show this book to my daughter while not reading it just so my daughter could see an mixed child and his mom. The father is absent although he is referred to in the text. This is valuable for those single mother households. I will either make up my own words or just talk about the pictures and let my daughter make up a story. To me, the kid looks scary or zany looking in half the illustrations which some parents and kids may enjoy. That’s not my thing though.

Book Review for I am Living in 2 Homes by Garcelle Beauvais and Sebastian A. Jones 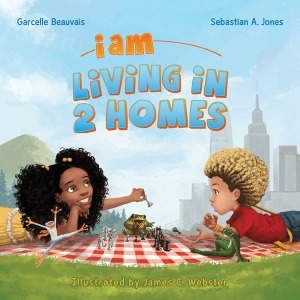 From authors, Sebastian A. Jones and Garcelle Beauvais, we have the second book in the “I am” series of children’s books featuring fraternal twins, Jay and Nia. We met Jay and Nia in their first book, I am Mixed and now in I am Living in 2 Homes, the happy family that we met originally has experienced a split. Mom lives in the country near a river and dad lives in the city near sky scrapers. The children have fun playing in nature doing things like fishing and running after butterflies with mom and doing city things like baseball in the street and eating hot dogs off of food carts, with dad. This book captures the full spectrum of emotions that children feel in the face of their parents splitting up all the while showing us children who are celebrating life; who are joyful in the time they spend with each parent. The difficult feelings that they have to deal with like guilt and fear of their parents forgetting them if they remarry are illustrated first on the faces and in the gestures of the trio of frogs and toads that magically befriend and serve as entourage to Jay and Nia throughout the book. The trio of frogs adds humor throughout the story, which deals with the complexities of this heavy topic through a poetic narrative and many illustrations of parents hugging and reassuring their children.

James C. Webster’s illustrations are evocative and poignant. Adults will feel every emotion I’ve described and more as they read to their children. At the end of the book there’s a note from Jay and Nia about appreciating all family. Children have an opportunity to fill out a discussion form that allows them to identify good things about themselves and good things about living in two homes. There is also a parent discussion guide on using the book to discuss your family. Overall, this is a good book for children to have in the face of divorce or separation and is a great companion for parents who have to discuss the split family with their children and may have difficulty steering the conversation.