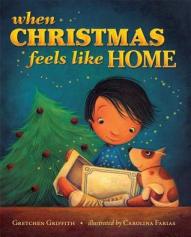 This is a story about finding peace. Many of the Children’s books which feature Latin or South American children leaving home often cling to the concept of acceptance. The characters yearn to be part of the new culture’s home, or they have a desire to accept their current state of life or accept that nothing will ever be the same.

Acceptance is a very complicated and almost jarring concept. In this book, Eduardo is moving, and he must come to terms with this movement. He feels confused when children are playing football with a brown, egg-shaped ball, while he understands futbol to be different. He has to constantly accept that this new world is different, confusing, unreal.

Soon the unreal becomes real: the hillsides turn color “…the color of the sun” (12), the trees began to lose their leaves and stand like skeletons (13), and the winter comes with all of the anticipation of Christmas. The book reels forward, moved by the rich, dark illustrations and the comforting, and repetitive call of Eduardo, whose acceptance of this world is suspended in disbelief, and he repeats “No se puede” (that can’t happen).

Despite the title’s suggestion, the story is not driven by the concept of Christmas, but by the treasure within a secret box which can only be opened at Christmas. As time moves on, Eduardo’s hard reality begins to smooth. He learns and grows. Eventually he accepts the changes around him. Acceptance is no longer an indicator of difference, abruptness, or shock; acceptance begins to smooth into peace. And on the last page, the reader is given a very strong, and comforting message of peace. 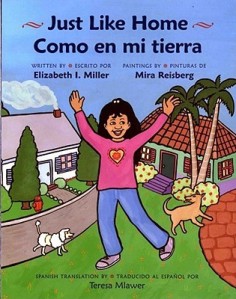 One thing that is important to do when considering books for your children, is to consider the wholeness of a book. Not only should we encourage books which highlight diverse stories, we should also encourage innovation and cultural understanding. “Just Like Home / Como En Mi Tierra” satisfies the first, but is lacking in the latter.

The story follows a girl who emigrates to the United States from Mexico (assumed). The girl is anywhere from 4 – 9 years old, but her age and the age of the intended audience is not specific. The unnamed girl observes the world around her and makes comparisons: this is like home, this is not like home. The English is translated into Spanish and there is a glossary in the back.

However, there are a lot of mistakes. Namely, the title of the book in English is correctly capitalized, but the Spanish is incorrectly capitalized, which sets a very awkward tone for the book: as if the Spanish portion of this story is just tossed in for good measure. There is an air of laziness in the construction of the story and the illustrations. The book feels and looks like those 50 cent books your mom bought you from the pharmacy rack in 1985 and although some of my favorite children’s books came from that same rack, this book has unremarkable characters, sloppy illustrations, and was even offensive in one moment.

On page 20 the unspecified female character is not included in the school yard games. On the next page she says “Not like home,” comparing the exclusion to her life back “home” (again, unspecified OTHER place), but the illustration is what bothers me: Children playing with a pinata. On pg. 20 they are in a school yard, on pg 21 she is playing at a party with a pinata. If this unspecified girl was at a party in America with her family, she WOULD play with a pinata, but the pinata in this specific comparison seems to be working as some kind of cultural indicator which is pinpointed through an overused and lazy stereotype. The pinata, although a staple in Mexican-American and Mexican parties alike, is not some kind of cultural marker as exclusively “Mexican.” It isn’t necessary to toss tacos, sombreros, or pinatas into a book just to pinpoint the “other” culture. If it is contextually relevant, sure, but in this case it is not. “Not like home” should have been a caption for an image which depicted the girl playing in her school yard back home.

In the end, I like to encourage books which use English and Spanish; books which present children of color and their struggles; books which encourage new representations of cultures with a deep awareness of that culture; I want you to buy books that are not just doing these things on a shallow, let’s-just-get-a-brown-kid-on-a-page, kind of book, but books whose goals are deeper and more rooted than that.

Duyvis’ Otherbound is a tour-de-force in complications. The story is told through dual narrators, Nolan and Amara. Nolan, a bilingual Hispanic teenager growing up in small town Arizona, has a crippling neurological disorder, masked as epilepsy. This disorder has already cost him one foot and incurred massive medical debt for his working class family. In the past, Nolan’s disorder even caused hallucinations whenever he blinked. He is constantly aware of the burden he unintentionally places on his family and struggles to connect with those around him, his disabilities impairing him both physically and mentally. Nolan is also doing his best to hide a secret: the hallucinations never stopped. Every time Nolan closes his eyes his mind is transported into the body of our second protagonist, Amara.

END_OF_DOCUMENT_TOKEN_TO_BE_REPLACED

This is a book of free verse poems about the poet’s childhood experiences in nature, travel, and with his family during his visits to his grandparents’ home in Mexico. The poems are filled with simple vignettes of imagery. They are printed first in Spanish then in the English translation. All poems are accompanied by vivid oil painting illustrations. This is a great book to introduce middle school and older elementary children to free verse poetry while imparting the wonder of being a part of the life of grandparents in a different rural country every summer. All children who spend extended vacations with family members during the summer will relate with these poems of familial love and journey and those who visit Mexico will enjoy this celebration of the rural Mexican landscape, lifestyle and Mexican culture. 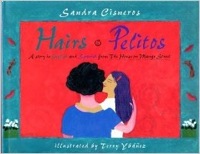 A very simple story told by a little girl who seeks comfort in her mother’s smell, embrace, and love. The first person narrative partially frames the oil painting illustrations with the English text at the top and the Spanish text at the bottom of the page. The protagonist enters the story through a discussion of her family’s different hair types. With uncommon descriptions of their hair as analogous to brooms, rosettes, and fur, she tells us of the diverse look and behavior (slippery, lazy, etc.) of her family members’ hair. Diversity is also found in the family through the illustration of each of them as a different color so that they are literally a rainbow family. The front and back covers of the book have educational lessons and crafts exercises for readers making this a hands on bilingual story of family love. 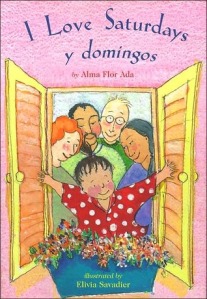 This is a valuable book to show the bilingual and bicultural immersion of a girl who is  multiracial Mexican and Caucasian USAmerican. On every alternate page the protagonist speaks Spanish with her Mexican grandparents. On the surface, the grandparents are different—in addition to their race/ethnicity, the USAmerican grandparents live in the city or suburbs, the Mexican grandparents live on a farm near a fishing pier. The illustrations are lively and evocative. It is a formulaic story of comparisons: My grandpa buys me balloons: my abuelo buys me a kite; my grandma makes pancakes; my abuela makes me huevos rancheros…fourteen pages in, I drifted from boredom. Despite the fact that the comparisons went on for too long in my opinion, the parallel lifestyles and interests of the grandparents makes a powerful impression on the reader of the similarities of people who seem very different. Although the details of their lives are very different, both sets of grandparents love their pets, enjoy the circus, like making things by hand, create exceptional ways to make the protagonist happy and, of course, love their granddaughter.
The plot turn which is actually fun should have come earlier in the book—the protagonist has a party at her house that both sets of grandparents attend during which the grandparents help out with the children. The Pinata and the traditional Mexican birthday song are fun. You and your child may actually want to learn the song as I did. 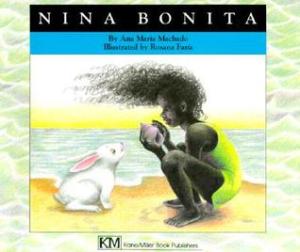 This book was originally written in Spanish and I read the English translation. Set in Brazil, with a spotlight on that country’s African Diaspora population, the magical friendship between a child and a rabbit whose speech every human can understand, grounds the narrative in levity and fantasy from the first page. Creating a balanced contrast with the text that likens the child to princesses of Africa and fairies from the moon, the straightforward discussion of family likeness and illustration of a full range of Brazilian phenotypes and ethnicities gave me goosebumps as I read this story. Nina Bonita is a girl whose dynamic dark beauty includes “hair curly and pitch black as if made of unwoven threads of night; skin dark and glossy just like a panther in the rain,” who has captured the heart and adoration of a white bunny who wants so much to have a daughter like her. He thinks he must be black himself to have such a daughter and asks Nina “what makes your skin so dark and pretty?” Nina has no idea how she got to be black especially since her mother is brown and her father is white but she makes up stories of how she may have gotten her color. Although the narrative is funny, Nina’s stories are a testimony to the sad fact that white or light is considered normal in her life so she comes up with extreme reasons for “becoming” dark instead of seeing herself as a reflection of her family. The bunny rabbit’s misfortunes in trying to become black like her by following her stories –mainly ending up sick and with diarrhea from drinking coffee and eating blackberries—also demonstrate the pitfalls of not discussing a child’s heritage with him/her. Ultimately, Nina Bonita’s mother overhears the conversation between the girl and the rabbit and tells them that Nina looks just like her grandmother. “Of course!” declares the rabbit who immediately ventures out to find a beautiful “night black” rabbit wife with whom he can make a daughter.
I don’t know if this is because of the translation or if the original had this wording but I’m disappointed in the language that makes it “natural” that Nina Bonita would become the godmother of the jet black bunny that is born to the bunny couple and the assertion that the bunnies have lots of babies “because when rabbits start having babies they never seem to stop” – I’m aware that I’m made uncomfortable by my own experience with racist stereotypes in the U.S. –an issue a few of you may or may not have as well. Other than those little blips, this story contains lyrical language and spirited drawings that bring to life the beautiful diversity of a Brazilian family, elevating the beauty of the least celebrated phenotype in most societies without any negative controversy over her belonging or her natural beauty. It will take you three weeks to receive the book when you order it from Amazon.com but it is well worth it and if you can read it in Spanish, you should get it in the original or maybe both versions. Enjoy.