A Dance Like Starlight: One Ballerina’s Dream by Kristy Dempsey 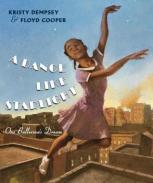 A Dance Like Starlight: One Ballerina’s Dream follows the aspirations of one little girl in Harlem in the 1950s. Told in lyrical prose, the reader learns that the unnamed African-American girl spends her afternoons dancing backstage at the dance school her mother works at. She spends her evenings wishing upon unseen New York stars for a dream most consider unthinkable during this era. Still, every single day she practices her pliés and chassés with fervor.

One day, her backstage routine catches the eye of the Ballet Master himself. He invites her to join in on a daily lesson with the white girls in the class (in the back row), although she’ll never be able to perform onstage with them. Since joining the class, she pushes herself harder to be the best ballerina she can be. And whenever she’s asked to demonstrate a movement for the whole class, the little girl thinks for a fleeting moment that even a “colored girl like me” could become a prima ballerina someday. END_OF_DOCUMENT_TOKEN_TO_BE_REPLACED 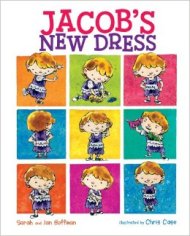 Jacob’s New Dress is a touching, realistic tale of a little boy who is dealing with the fallout of being gender non-conforming. Written by parents of a “son who loves pink”, the story is educational without being didactic. Bright, playful illustrations animate a gentle description of conflict at school, which is resolved by caring parents and supportive friends.

END_OF_DOCUMENT_TOKEN_TO_BE_REPLACED

Roland Humphrey is Wearing a WHAT? by Eileen Kiernan-Johnson 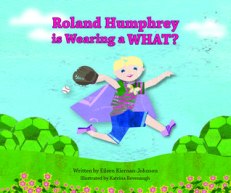 Bright paper collage illustrations serve as a backdrop to Roland Humphrey is Wearing a WHAT?, the tale of a boy who likes to wear pink, sparkles and dresses to school. The story hinges on the relationship between Roland and two little girls at the bus stop who try unsuccessfully to educate him about the “color rules 4 boys.”

Roland blatantly violates these rules on a daily basis. Instead of “blues, browns and DARK purple,” Roland wears violet-striped shoes, a butterfly on his “manly green” shirt, and a sparkly blue barrette in his hair. END_OF_DOCUMENT_TOKEN_TO_BE_REPLACED

Duyvis’ Otherbound is a tour-de-force in complications. The story is told through dual narrators, Nolan and Amara. Nolan, a bilingual Hispanic teenager growing up in small town Arizona, has a crippling neurological disorder, masked as epilepsy. This disorder has already cost him one foot and incurred massive medical debt for his working class family. In the past, Nolan’s disorder even caused hallucinations whenever he blinked. He is constantly aware of the burden he unintentionally places on his family and struggles to connect with those around him, his disabilities impairing him both physically and mentally. Nolan is also doing his best to hide a secret: the hallucinations never stopped. Every time Nolan closes his eyes his mind is transported into the body of our second protagonist, Amara.

END_OF_DOCUMENT_TOKEN_TO_BE_REPLACED 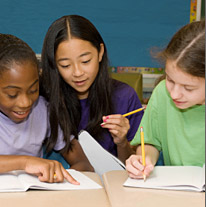 MDR, the ‘zine for children from Mixed Diversity Reads Children’s Book Review is seeking prose, poetry and illustrations featuring as protagonists children who fall into one of the seven categories of diversity to which the website is dedicated. The target publication date for the first issue is December 6th and submissions need to be sent no later than November 6th. Please see submissions guidelines here http://mixeddiversityreads.com/mdr-a-diversity-magazine-of-childrens-writing-and-art/mdr-submissions/ 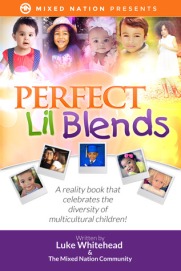 Perfect Lil Blends: A Reality Book that Celebrates the Diversity  of Multicultural Children  is like a series of love letters from parents to their children accompanied by their children’s portraits. Compiled by Luke Whitehead, the founder of Mixed Nation, this is a photo essay of children of mixed heritage from almost every racial, cultural, and ethnic background. Yes, most of these children are exceptionally beautiful however, similar to, but more personal than, Kip Fulbeck’s photo essay book Mixed, each photo of a child is accompanied by a description of the child’s life interests and a note of dedication from the parents to the child, making this more than a vanity book of portraits. END_OF_DOCUMENT_TOKEN_TO_BE_REPLACED

This Day in June by Gayle E. Pitman 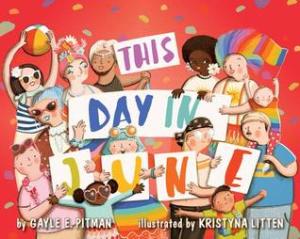 This Day in June by Gayle E. Pitman is an easy way to introduce a child to the joy motivating people to celebrate in Pride Parades every year. Easy to follow, simple, two line rhymes in inconspicuous locations on the pages, which seem to overflow with vibrant illustrations, describe the many sights common in a Gay Pride Parade. Not a part of the sparse text, but present in the illustrations are many of the political messages that are commonly seen at a Gay Pride Parade. While the illustrations are fun, this isn’t like the books we normally review, which represent LGBT-parents leading a family. There are children in a few of the illustrations but most of the illustrations feature adults having parade fun, which means that in addition to images of people with rainbow colored hair, parade floats, flags and Carnivalesque costumes, there are illustrations of men without shirts and adults kissing. When I saw the images of bare chested men, bikini-top wearing marchers and adults kissing, I had a strong oppositional reaction to the idea of showing this to a child however reading the discussion guide in the back of the book helped me to see that a child looking at these illustrations would not read the same sexual context that I see, into these images. END_OF_DOCUMENT_TOKEN_TO_BE_REPLACED