Adults may find turkey dry and tasteless, but for Tuyet a turkey is symbolic of being the cultural majority, of fitting in, doing what one is supposed to do. Duck for Turkey Day follows a little Vietnamese American girl, Tuyet, who’s terribly upset her family is having duck for Thanksgiving. What follows is an engaging story of accepting of one’s heritage as well as general diversity.

Immigrants often have to negotiate how to preserve and honor their traditions while allowing their children to grow up American, and this book portrays a matter-of-fact immigrant family that plans on cooking some delicious duck regardless of what their little girl thinks. Some parents may give in to their Americanized kids and cook American food, but as Tuyet finds out, some of her classmates had noodles, enchiladas, or tofu turkey on “turkey day” as well. END_OF_DOCUMENT_TOKEN_TO_BE_REPLACED 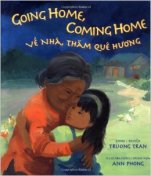 Going Home, Coming Home is a bilingual (English-Vietnamese) story book for all readers who feel “home is two different places,” on the left and right sides of their heart. The author, Truong Tran, sets this book in Vietnam and based it on his own upbringing. But I think the story will ring true with any family who has left their first home to make a second home in a different country. END_OF_DOCUMENT_TOKEN_TO_BE_REPLACED

Rebecca’s Journey Home tells the story of the author, Brynn Olenberg Sugarman, bringing home her daughter Rachele (“Rebecca” in the story) from Vietnam. Instead of the “Sugarmans”, the family in the story is the “Steins”. While the title centers on “Rebecca”—the Vietnamese adoptee, the story speaks more of the family’s adoption journey. Therefore, young siblings anticipating the addition of an adopted child into their home (or young siblings recently experiencing such an event) can especially identify with this story. END_OF_DOCUMENT_TOKEN_TO_BE_REPLACED 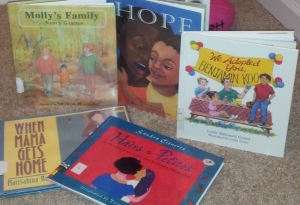 The Website, which founder Omilaju Miranda began as a page on facebook is now a full website with blog where you can find books with diverse protagonists by specific category. Books are easily locatable on a drop down menu. The site is dedicated to listing and reviewing children’s and YA books with protagonists who are either: biracial/mixed, transracial adoptee, bilingual, lgbt-parented, single-parented, or gender non-conforming. There is also a magazine where the site will feature writing for, and by children, and an opportunity for parents to send in photos and videos of their children reading or reciting stories and poems. Check out the book site and find the book for your little one today. If you are a writer or interested in communications and publicity, the site is actively seeking children’s book reviewers and interns to publicize and network with schools and libraries.