Book Review for We Adopted You, Benjamin Koo by Linda Walvoord Girard 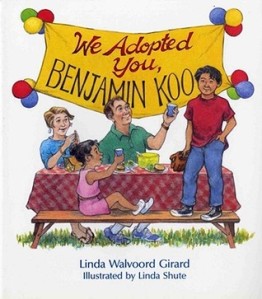 This is a first person narrative from the perspective of the adopted child, Benjamin Koo Andrews. In it he tells his life history from birth to his current age—nine-years-old. His story discusses everything from being left at the doorstep of an orphanage when he was approximately 10 days old through his toddler years, early childhood, discovery of his racial difference from his parents and rebelling because he was adopted, adopting his sister and dealing with taunts at school. The book feels like a documentary but it is very informative and acknowledges a wide range of life experiences and feelings that a child who doesn’t share the race or country of his parents may face. The illustrations make the heaviness of the narrative approach a little lighter and this definitely is a book that I feel is a powerful tool for a parent to use to discuss adoption with their child; the text feels like it was written for that purpose moreso than anything.