An African Princess by Lyra Edmonds 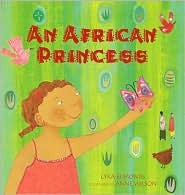 This is a lovely, simple story that deals with some complex identity issues without allowing any of those issues to feel heavy. A Mixed Heritage girl goes on a journey that affirms all the parts of her identity—Caribbean African Princess and United States acculturated, freckle-faced, city girl. At the center of this story is Lyra—a freckle-faced brown girl who lives on the tenth floor of an apartment building in the city but her mom tells her she is an African Princess. Starting with the light mentioning of Lyra’s African Princess ancestor captured from Africa and taken to the Caribbean, the story then moves to showing Lyra’s life as a city princess in the United States. Illustrated with collages, that make the reader feel like they are in the middle of an African Diaspora quilt world, the story of African quilts and robes that have traveled around the world as physical surviving representations of African heritage  is shown without being told.

By omilaju in Mixed biracial Black White on July 28, 2014.
← The Rabbits’ Wedding by Garth Williams Mixed Blessing: A Children’s Book About a Multiracial Family by Marsha Cosman →