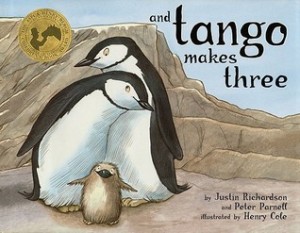 So, did you know that there was a true story of two male penguins partnering for life, adopting a penguin chick and raising her? Neither did I until I reached the end of And Tango Makes Three, but this all happened at the Central Park Zoo and what a wonderful way for us to see that family takes all constructs in the animal world as in the human world. I think that the fact that this is a true story should have come earlier in the story, to make it more universally appealing as the wonder of it all is that the way the penguins manage their life as a couple and family is very similar to the way that humans find their way, emulating their hetero-normative parents and fellow citizens. Until I knew that this was a true story, I kind of felt like the book was agenda driven which was uncomfortable; once I knew it was a true story I was in awe at the universality of relationship experiences that may very well cross all species. Roy and Silo (the protagonist penguins) are good sitters to the egg given to them by the zookeeper, and when Tango emerges from the egg, they are good parents to her. Because of the straightforward comparative writing, I would say that this book is like a National Geographic story for preschoolers and elementary students with appealing illustration that makes entertaining use of the page. The story is one that everybody of all ages should know to increase awareness and acceptance in society. I tend to like stories that are strong in plot and character internally and independently whereas And Tango Makes Three depends a little too much on comparing the same-gender couple to opposite gender couples and penguin families for my tastes but there is value in informational picture books as well as those grounded solely in good story.

By omilaju in Lgbt parents, Two Dads on July 28, 2014.
← My Mommy is a Boy by Jason Martinez Molly’s Family by Nancy Garden →