The Purim Superhero by Elisabeth Kushner 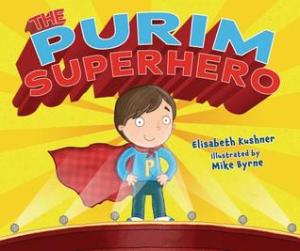 This is the coolest story book, exceptional in that dialogue is plentiful—it is full of the realistic conversation that goes on between children and their peers as well as the adults in their lives. Nate has to decide what to be for the Purim Celebration at his synagogue but more importantly, he has to decide whether to be himself—a boy who wants to dress up as an alien— or a follower of the crowd. The crowd in this case is the group of boys in his Hebrew class who are dressing as superheroes. His fathers encourage him to be strong enough to be himself and he comes up with a surprise costume that makes him feel like he is true to himself and will be welcome with the boys in his class. I thought we would get through this entire story without discussing the way in which Nate’s family is different but ultimately as a part of the conversation encouraging Nate to be himself, he and his fathers make a reference to his fathers’ dedication to being their true self. However, conversation over his fathers being two dads instead of a mom and dad does not take up much space in this lovely story about an elementary child’s apprehension over being different from the group and the imaginative solution he finds to restore his confidence. A lovely story for every child who at some point will want to resist peer pressure to express him/herself.

By omilaju in Lgbt parents, Two Dads on July 28, 2014.
← Molly’s Family by Nancy Garden The Sissy Duckling by Harvey Fierstein →