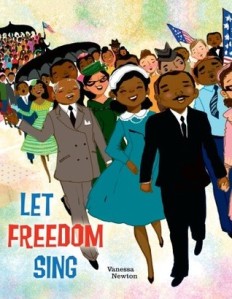 With stylistic, cartoon-like illustrations and a focus on the children’s gospel song, “This Little Light of Mine,” Vanessa Newton tells the story of the Civil Rights Movement from the 1950s until the 21st century in a way that is accessible for children as young as three years old. Filled with illustrations of people of all racial, ethnic, and lifestyle backgrounds working together for freedom, this book is a fun, inviting representation of the United States’ Civil Rights Movement. If you buy this book for your three-year-old, it can grow with them up to the age of ten. Every reader will sing the song that appears, at least in part, on every page. The illustrations tell the non-violent conflict aspect of major moments in the Civil Rights movement, however the language accompanying the illustrations in the foreground typically just names the historical figure saying that they let their light shine. A typical example is an illustration of Rosa Parks on the bus and the words:
“Rosa Parks refused to move,
She let her light shine.”

If your child asks questions, you can fill in the gaps with history at the depth and detailed level that your child can handle. On the inset of some of the pages, there is a more detailed history that you can read to older children. The one exception to what I’ve described above is the image of protestors holding rocks ready to throw them at Ruby Bridges. You may want to turn past that page for younger readers. I am also bothered by the author/ illustrator’s choice to draw Barack Obama as a dark-skinned man more reminiscent of the King children than himself. Other than an inexplicable choice on the illustrator’s part to mis-represent Barack Obama, I like this book for all children.

By omilaju in Uncategorized on July 29, 2014.
← Everywhere Babies by Susan Meyers Shades of Black by Sandra L. Pinkney →