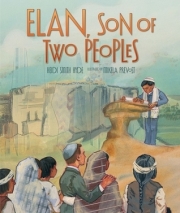 Elan, Son of Two Peoples by Heidi Smith Hyde and illustrated by Mikela Prevost is an artistically captivating and rustic story about thirteen-year-old Elan’s journey to becoming a man across the cultures of Judaism and the Acoma Pueblo. Set in 1898, Elan and his parents travel from their home in San Francisco to Albuquerque, New Mexico where his mother’s family lives. Elan’s father is a Jewish immigrant from Eastern Europe, and his mother is the granddaughter of a Pueblo Indian chief. The story takes place just days after Elan’s thirteenth birthday, a very important coming-of-age marker in both cultures. The reader does get a glimpse of his Bat Mitzvah and his Jewish culture, but a majority of the story focuses on Elan’s trip to New Mexico and the ceremony that honors him as a Pueblo tribesman.

With his mother’s side of the family, Elan experiences important aspects of Pueblo culture like storytelling and performing ceremonial rituals in a southwestern kiva. Throughout the story Elan is nothing but excited and enthusiastic about celebrating both parts of his familial background and cultures. At one point in the story, Elan’s mother says to him, “Always remember, you are the son of two proud nations whose roots are as sturdy and deep as this oak tree.” She then gives him a special tallit she wove herself that portrays vital symbols from both of his cultures: the Star of David, the Ten Commandments, a stalk of corn, and an oak tree.

Elan, Son of Two Peoples is a complex picture book for anyone who is proud of having a duocultura famil. Prevost’s illustrations are nothing short of stunning—showing colorful vistas of mesas and the landscape of the American southwest. Although the story does put more emphasis on Acoma Pueblo traditions, this should not deter any reader of Jewish faith, culture, or otherwise. The only note to consider when choosing this book is that this story is based on a true historical story, and is not set in a contemporary setting.

By omilaju in Bilingual, Boy Protagonist, child of an immigrant, First Generation American, Mixed Biracial Native American White, Native American on December 27, 2014.
← Flowers from Mariko by Rick Noguchi and Deneen Jenks The Way We Do It In Japan by Geneva Cobb Iljima →