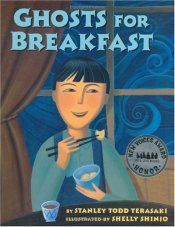 Stanley Todd Terasaki’s Ghosts for Breakfast is a read that Japanese American families may enjoy reading together, but that not every child will be able to appreciate.

The story begins with three old men knocking at the door to tell the young narrator’s family that they have seen ghosts in the neighboring field. This tale, as explained on the book jacket, is based on an experience of the author’s ancestor, and takes place in a Japanese American farming community in the 1920s. The body of the story provides no explanation of the time and place, and the vague setting might not grab or hold the attention of children who are looking for something more relatable. What may engage them is the comic flavor of the three old men, referred to as The Troublesome Triplets, and the scared feeling evoked by the ghosts they describe. The suspense builds as the narrator and his father go out to the neighbor’s field to investigate.

The story resolves quickly, so children do not have to squirm with their fear for too long. However, when the father reveals to the narrator that the ghosts are, in fact, something completely harmless, it may be more than a little anticlimactic. SPOILER ALERT: The “ghosts” are long, white daikon radishes, hung out to dry and blowing in the wind. It turns out that the neighboring farmer had already offered the family some of their crop, and the narrator and his father gather up some of the daikon to take home to share with the Triplets.

The climax of the story hinges on knowledge of daikon, a Japanese root vegetable that most children will probably not recognize. The tale presents an opportunity to introduce a cultural food to children who are of Japanese or of otherwise Asian descent, or possibly to children who are interested in cooking, ethnic foods, or farming. However, as far as the story is concerned, it may be a bit of a letdown to find out that the “ghosts” are really just what appear to be big, white carrots.

Children of Asian or Pacific Islander descent will likely identify with the faces of the story’s five characters. There is only one minor female character, Mama. Shelly Shinjo’s beautiful illustrations are colorful, vivid, and evoke warmth, humor, and mild fear as the story unfolds.

Recommendation: Recommended for children ages 4-8, depending on reading level. This book is specifically recommended for children who express an interest in the early life of Japanese American great-grandparents or other relatives; it is worth infinitely more if an older adult can provide broader context to the story. This book may not be suitable for young children who scare easily, but could be used to demonstrate that things which frighten us often turn out to be pretty ordinary.