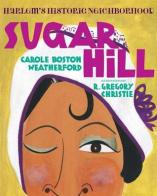 Harlem’s Historic Neighborhood Sugar Hill by Carole Boston Weatherford is an illustrated celebration of famous African-Americans who lived and thrived during the Harlem Renaissance of the 1920’s and 1930’s. The book is written using rhyming text, introducing the people and the culture of the neighborhood. The illustrations are bright and inviting for both young and older readers. The illustrator, R. Gregory Christie weaves style, color, size and placement of the words into the page so the reader is drawn to stop and notice the details of how Sugar Hill might have looked. The last two pages of the book feature short biographies, giving more details about the featured residents.

This book would be a great resource for a classroom teacher or a family beginning to learn about celebrated African-Americans of the past, highlighting some lesser known individuals. Displaying the cover of this book on a shelf- a lady with one curl dangling down and a winking eye- would entice any child. It would work well as a shared story for younger ages focusing mostly on the pictures and introducing the residents. This book would also work well with older grades as a jumping off place for many units of study, such as, the Harlem Renaissance, American History in the 1920’s, and African-American contributions to the arts.

There is not much of a storyline so it does not seem like a book a child might choose again and again for a nighttime read, but the illustrations are colorful and inviting, so it does warrant checking out from the library.

There are two small criticisms I have for the book. The rhythmic text did not work for me. The choices of words were sometimes messy and the beat was inconsistent. As a teacher who loves reading books aloud, this discourages me from choosing this title. Also the very last page of the story is alongside the biographies preventing the story from ending neatly. I found that instead of focusing on the happy family pictured and letting the conclusion’s words linger in my mind, my eye automatically traveled to the neighboring page and began reading the biographies. One can solve this problem by slipping in a blank piece of paper at the end of the book to help the audience’s eyes and minds stay focused on the last page of the story.

The characters in the book are shown in varying shades of brown, but many of the highlighted characters are shown with lighter brown skin. Not being familiar with all of the people featured I began to track down images from the web. Many were black and white images so I was unable to see brown, but it seems that yes, indeed, many of the more successful individuals living in Sugar Hill had light skinned features. It made me wonder how I would have a conversation with my children about past and present prejudices surrounding skin tone, especially pertaining to African-Americans.

I recommend this book for classrooms of all ages and for readers 5+.

By omilaju in Diversity -- general on January 31, 2015.
← Many Ways: How Families Practice Their Beliefs and Religions by Shelley Rotner and Sheila M. Kelly First Rain by Charlotte Herman →