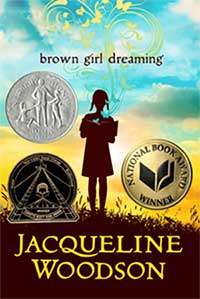 Jacqueline Woodson’s lyrical memoir, Brown Girl Dreaming, is memorable, and not only because it won the prestigious National Book Award in 2014, the 2015 NAACP Image award and is a 2015 Newberry Award Honor Book. At its roots, Brown Girl Dreaming feels distinctly American.

Woodson’s memoir speaks of a connection and separation with family as she reflects on her birth in Ohio, her early years in South Carolina, and her family’s move to New York City. Throughout the memoir she recalls the absence of her father, the strength of her grandparents’ love, and the disconnect of what makes a place “home” as she moves between the American North and South during the 1960s and 1970s.

Woodson’s narrative is linear: the book is organized into four parts and chronologically follows Woodson’s life from her birth to the later stages of her childhood. Told completely in poetic free verse, Woodson’s poetry is easily accessible, following more traditional modes of form and lineation. Each poem is powerful, yet they work cohesively to tell Woodson’s childhood stories of learning to love writing and herself.

Brown Girl Dreaming is not a story that will disappear lightly. Its themes are strikingly contemporary as Woodson’s young narrator lets the reader in on a journey that seeks to understand how race and faith shape a person’s childhood, family, and friendships. This book is one that walks quietly and affects deeply. In short: Brown Girl Dreaming is a book to return to, and a book that will continue to hold its head high for a long time.
Recommendation: Highly Recommended, Ages: 11+