Mira in the Present Tense (originally published in the U.K as Artichoke Hearts) by Sita Bhramachari 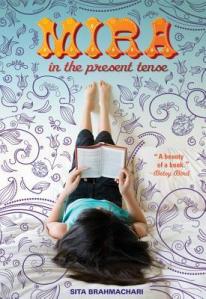 Mira in the Present Tense is definitely a three-hankie book. This storyline tows the reader on an emotional roller coaster, gently rocking us back and forth through sadness to acceptance, up to excitement and down to understanding, and over and under through past and present. I found myself tired, but at ease, with the characters slowly strolling through my mind.
We meet Mira, the Indian-Jewish protagonist, days before her 12th birthday and just before she joins a writing class and begins her May Day journal. Mira in the Present Tense is organized by dates instead of chapters, just as a journal would be. For the next month, we jump into Mira’s life as she reaches the highs and lows of the normal coming of age milestones- starting her period, her first crush and first heterosexual kiss, finding her own voice, and standing up to her bullies. At the same time, we join Mira as she and her family live with the impending death of her dad’s mum, Nana Josie. With Nana Josie gracefully leading the way, Mira learns that some heartbreaks are necessary if you truly love the person.
The strength of this book is in its characters, with Nana Josie stealing the spotlight. In her own words, “It is bloody hard work dying well,” but Nana Josie indeed does die well 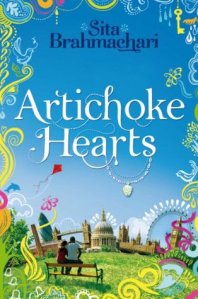 with grace and kindness for all who will miss her. The author, Sita Brahmachari, places layer upon layer until each individual is shaped in our minds. Mira at school is almost painfully shy and introspective, relying only on her best girlfriend and later on a boy in her writing class. But with Nana Josie, Mira is uninhibited. Nana Josie lends Mira her creative strength and her unbound love. Pat Print is another character of note. She appears to Mira in the most honest ways at the most unexpected time, almost as if she is Mira’s guardian angel.
Mira is of Jewish and Indian descent, but beyond her name there is not much mention or focus on this fact in the story. I found this quite normalizing as our children of mixed heritage will no doubt identify with Mira for her racial make-up but everyone can identify with Mira for the struggle she is facing in the death of her grandmother. There are two other characters I would like to point out to potential readers. Mira’s crush, Jide, was a Rwandan refugee adopted by refugee camp workers. There are some small details about the atrocities in Rwanda and if children are unaware it might bring up questions. Jide talks about the physical differences between himself and his adopted parents. He also mentions how frustrating and mad it can make him when strangers make intrusive and uneducated comments. Mira’s Aunt Abi has a female partner, who we are introduced to early on. She does not play a main role and honestly, her brief introduction is quite off putting. When Mira writes, “Nana points to Abi, Aunty Mel—who is actually Abi’s girlfriend, but we call her aunty anyway,” I got the feeling that Abi having a female partner was accepted but not advertised or completely ok.

I recommended this book for ages 10-13.
Reviewer:  Amanda Setty