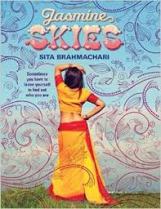 From the moment they meet in Kolkata airport the two cousins appear to be opposites with bi-racial Mira in a shalwar kameez and Indian Priya refusing to give up her skinny jeans and red Converse shoes for ethnic wear. Priya has abounding energy and confidence making sure she is noticed by cutting her long hair into a short pixie cut, balancing out her classical dance with fusion music and challenging traditional expectations whenever she can. Mira on the other hand prefers the sari shop to the mall, spends her whole day painting and wants to spend her time in Kolkata visiting her grandfather’s childhood home, which has been declared off limits by her aunt. Despite their differences, the two girls make a strong connection. Anjali, while genuinely loving and affectionate, refuses to speak of the past or revisit family history which only strengthens Mira’s determination to solve the mystery of why the two families had a falling out. Mira also meets Janu, a sixteen year old boy who was the first baby Anjali took in at her children’s refugee. Janu now more like a family member helps to run the refugee. Janu and Mira quickly connect through art– he is a carpenter and she is a painter. Mira also feels an instant romantic attraction to Janu and knows he feels the same, so she tries to quash her feelings out of allegiance to her longtime boyfriend, Jide, from Artichoke Hearts.

Brahmachari does an amazing job of making the reader feel like we are right there with Mira experiencing the colorful chaos of the Indian streets, suffering in the heat, struggling with the idea of some having so much while others have so little. Anyone coming from an industrialized country who has visited an industrializing nation will immediately connect with Mira as she describes the way she feels about Kolkata and its people.

This book brings up some very real yet intense topics, such as poverty, street children, begging for a living, including babies being physically marked for a begging ring. Prior to giving this book to a young reader it also might be worth knowing that there is a character with physical disabilities who was abandoned by her birth parents at birth, picked up by a begging ring and impregnated for the idea that a person with disabilities and a baby will bring in more money. Details of the impregnation are not given. The woman and the baby both end up in happy living situations.

Recommendation: I recommend this book for readers ages 15 and up.